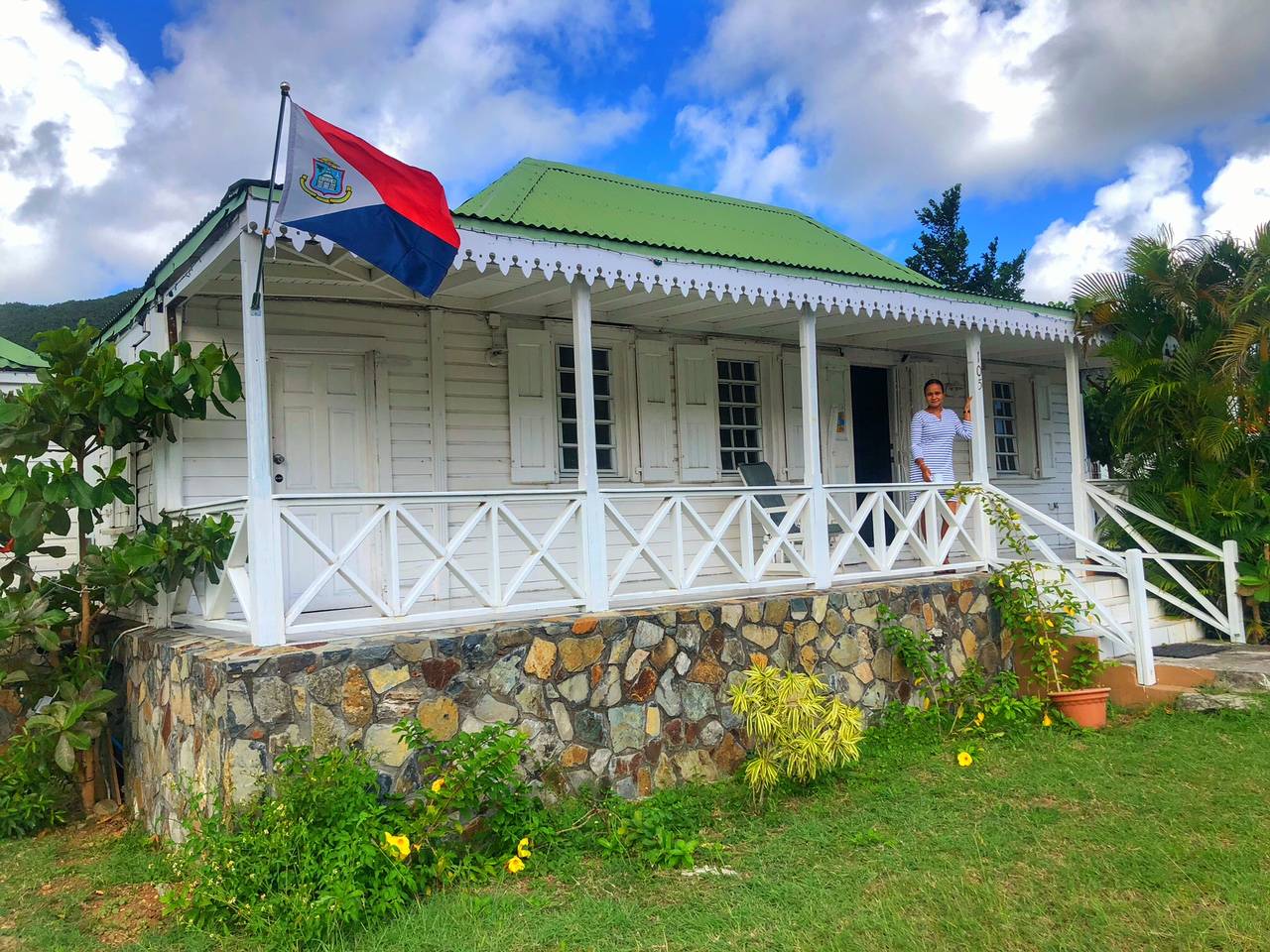 Natasha Richardson was born and raised on Dutch side St. Maarten. Her early childhood years were spent at the “old house” as her family used to call it. She and her brother would be dropped off here after school. The old house belonged to her grandparents, Mr. Marius Richardson and Mrs. Beryl Richardson-Labega.

She and her brother, together with their cousins living nearby, would all play in the big open space surrounding the old house. They played tag and used the remnants of an old stone oven as their self-declared “safe spot”. They played pretend under the almond tree on the outskirts of the big yard or picked pomserrat off the trees in the yard and savored that sour fruit all day if they could, or until their grandmother, already in her eighties at that time, would tell them to stop. Natasha remembers how her grandfather, with whom she had little interaction, would wait on the porch for his longtime friend Mr. Rogers, who would visit almost daily for a game of dominoes and a drink or two.

She and her grandmother, however, were close. They shared a special bond, so special in fact that when she started getting frailer and had to be moved to a home, Natasha would visit her every afternoon after school and would always bring her herfavorite sweets as a treat, until she passed away in 1992.

Fast forward to 2005. Natasha, now all grown up and a social worker at that, bought the old house after an incident at work made her realize she needed something different in her life other than just her job. She needed a hobby.

The house was initially sold to a third party after her grandparents were gone, so her intention at the time was to get it back into the family where it belonged, but an idea gradually started growing in her head over time. Why not turn the old house into a bed and breakfast? As far as she knew, It was a concept never previously done on the island and she would get to share some of the island’s history as well as her family legacy with guests from all over the world.

History was always a favorite subject of Natasha’s and she submerged herself deeply into the island’s history and would sit for hours with the island elders and take in all that they told her about yonder years on Sint Maarten. She delved into archives at the census office, civil registry, Methodist church and Kadaster, and researched everything she could find. Natasha even joined the Sint Maarten Heritage Foundation & Museum and applied to become a member of the Monument Council of Sint Maarten. The old house was eventually declared a monument in 2008.

The idea to turn her precious Old House into a bed and breakfast became a more serious plan after Hurricane Irma in 2017. It would be unique and tastefully done and would serve as a venue for events like weddings.

The house dates back to 1902, according to records found and was once nothing but a dwelling with an outhouse and cistern on the property. Its surrounding 3 acres of land was then used as an area for cattle to graze. This piece of land in its entirety was called Pasture Piece and it used to be a part of the Retreat Estate Sugar Plantation.

The first owners of the property dates back to 1879, a family called the Van Romondts.  Back then they owned almost everything on Sint Maarten. Natasha’s grandfather was the illegitimate son of a Van Romondt and since he could not inherit the property because he wasn’t recognized as a child of his father, he worked hard as a bookkeeper for the van Romondts and together with Natasha’s grandmother, was eventually able to purchase the property in 1935.

Remodeling an old house that is over one hundred years old came with its unique set of challenges, and because it is a wooden structure, it required a lot more maintenance than a brick building. Natasha and her contractor partner decided on a more sustainable approach for the replacement of the floors, which were being eaten by termites. Matouba wood from Guyana was used for the floors in the venue area, which also serves as a museum, while the floor of the old kitchen and bathroom, now serving as one of the en-suite rooms of the B&B was replaced with bamboo. Both wood types are durable and not exactly favored by termites.

Room 1906, so named because it is the year Natasha’s grandmother was born, was completely transformed from old into modern, yet remaining in its antique shell.

Today the old house is known as Pasture Piece, a Bed and Breakfast, event space and small museum. Natasha still has two more rooms to complete, Room 1944, her father’s birth year and 1979 commemorating the year she herself was brought into this world. This will eventually also be the bridal suite to accommodate the many weddings Pasture Piece will no doubt be hosting in the near future.

Today, as a guest at Pasture Piece, one can expect a relaxing and comfortable stay, learn about the island’s history and enjoy delicious traditional Sint Maarten breakfasts in a place replete with history.