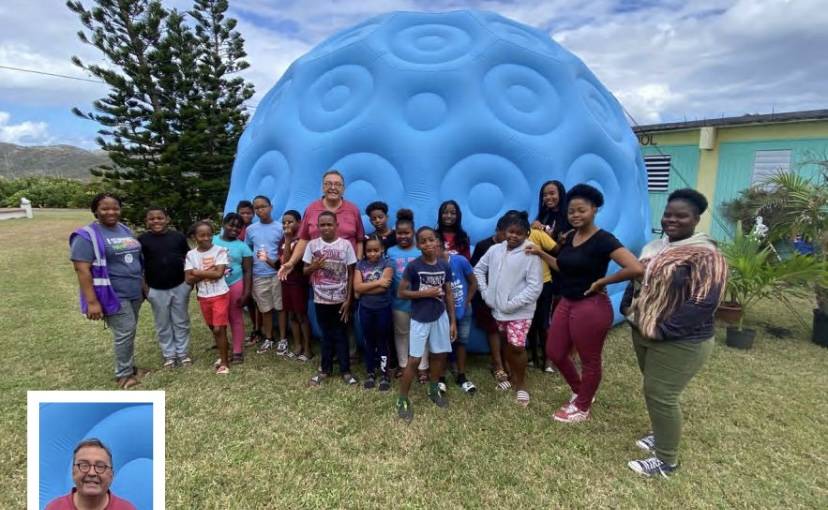 JAAP VREELING is passionate about getting youths interested in Astronomy. The fact that you can enjoy it both as a hobby and also work in that field of discovery on a professional level, gives him great satisfaction. His favourite constellation is Orion, because of the Orion Nebula and he likes to watch interesting stars like Betelgeuze. A student of Mathematics and Physics, Jaap’s life has been centered around Astronomy for many years. After his initial seven years of teaching in the Netherlands, in 1986, he travelled to the Dutch Caribbean island of St. Eustatius
(also called Statia) to assist with the start-up of secondary education there. In 1991, went back to the Netherlands, taught at a high school and later became acting principal of that school. He joined the Anton Pannekoek Institute of the University of Amsterdam (UVA) in 2008, assigned by New Observers to Visual Astronomy (NOVA) to develop educational programs for Astronomy at
primary, secondary and high schools in the Netherlands. From 2010, he worked as the coordinator of the Mobile Planetarium Project in the Netherlands, visiting schools with a planetarium. Over a tenyear period, 300,000 people visited their three domes! Jaap was council member of the International Planetarium Society (IPS) and president of PlaNed, the association of Dutch-speaking Planetariums in the Netherlands and Belgium.

Jaap has been involved with Astronomy from the age of 13. He has taught, toured, travelled
to other islands, organized and participated in Youth Camps for Astronomy (IAYC), co-founded
International Workshops for Astronomy and the  list goes on. Japp is now retired and lives on the Dutch Caribbean of Sint Eustatius with his wife, Rianne.

Having worked in the field of Astronomy for so many years, Japp’s dream was to take the
knowledge he has acquired and bring it to St. Eustatius. For him that would be a dream
come true – astronomy and the planetarium world brought to the small island he now called
home. That dream was realized. In December 2019, he was the recipient of a grant from the Van Dishoeck & De Zeeuw fund. With the grant, presented to him by the President of the International Astronomical Union (IAU), Ewine van Dishoeck, coupled with a contribution from
the Carib Trails fund, they were able to purchase a beautiful Planetarium in Spain. This planetarium now sits on the Berkel Plantation on St. Eustatius. With its beautiful, dark skies, there is a lot of interest in Astronomy on Statia. When the Planetarium opened its doors on February 23, 2021, the response was overwhelming and all shows were fully booked. There are no astronomy clubs on the island, but residents are eager to begin classes and activities.

A Planetarium on this small island of about 3,500 people is an exciting addition. An interactive
experience is offered, with a base line story requiring input from the audience which is valuable and guides the show. The sky at night is a starting point as they digitally proceed to the planets and stars. They have software comparable with larger planetariums of the world and visualizations of the latest discoveries like Black Holes are possible.

“All over the world you see a positive influence on learning by visiting a planetarium on a regular
base. It is no difference on Statia and we hope to motivate youngsters in the field of Science and especially Astronomy,” Japp said. “We live in a more visual learning world and what a contribution we can make for the youngsters on our Island!”

The planetarium is now semi-mobile but will soon have a permanent home. Before this happens,
however, Japp would like to head out with it on tours to neighbouring islands reminiscent of tours he did while teaching in the Netherlands. It is intended to add the Planetarium to the list of
tourist attractions on the island with a nominal fee for entry. Mr. Ishmael Berkel on whose property the Planetarium is located, expressed: “The future is bright, and we are here to ensure
that all Statians, big and small, have a chance to enjoy it. We also envision that tourists visiting our island will be able to have this attraction added to their vacation experience.”